Essentially, 27.8% of all people with diabetes in the U.S. remain undiagnosed, and thus, untreated. 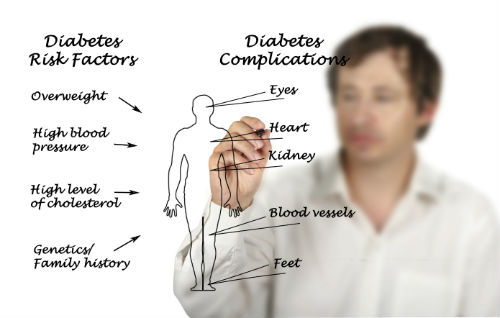 Type 2 diabetes is the most common form of diabetes. It is a condition in which blood glucose (sugar) levels rise higher than normal and the body does not use insulin properly. This is called insulin resistance.

At first, your pancreas tries to keep up with the demand and makes extra insulin to make up for it. But, over time your pancreas becomes tired and cannot make enough insulin to keep the body’s blood glucose at normal levels.

And when glucose builds up in the blood instead of going into cells, it can cause type 2 diabetes or pre-diabetes. If left untreated , diabetes can lead to serious health problems involving the eyes, kidneys, nerves, and circulatory system (the heart & blood vessels).

ATTEND MY LECTURE ON HOW TO PREVENT DIABETES AND LEARN EVERYTHING ABOUT DIABETES – AND YOUR ROLE IN ITS PREVENTION.

At my lecture, you will learn all about Diabetes:

AND OF COURSE, A FOOD AND WINE PAIRING, featuring the foods that often reverse, support, and PREVENT DIABETES.

Please refer to my Calendar of Events to see the dates for this upcoming lecture.

Things Happen for a Reason On Saturday, February 28, 1987, I ran my last marathon.  It was the Cowtown Marathon in Fort Worth, TX.  I never ran again. It all started and ended one beautiful sunny day in February 1987.  I had spent the 2 weeks before the marathon nursing a painful and swollen knee […]

Fall is here and so is pumpkin season! Get into the spirit of the season with this Spicy Pumpkin Sauce. The sauce pairs perfectly with whole wheat or any pasta of your choosing and takes less than 30 minutes to prepare.