There is No Magic Bullet!  If You Want to Lose Weight, STOP DIETING!

There is No Magic Bullet!  If You Want to Lose Weight, STOP DIETING! 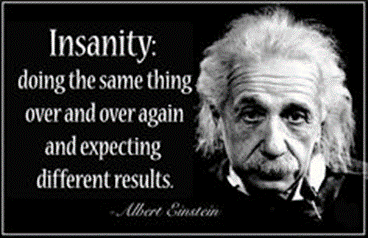 Albert Einstein’s definition of insanity is “doing the same thing over and over again and expecting different results.”  So, is it fair to say that Yo-Yo dieters are insane?  Kelly D. Brownell, Yale University, coined the phrase Yo-Yo dieting, a term that refers to “the cyclical loss and gain of weight.”  She describes Yo-Yo dieting as a process in which the dieter is initially successful in losing weight but is unsuccessful in maintaining the loss long-term and begins to gain the weight back. The dieter then seeks to lose the regained weight, and the cycle begins all over again.

My article this month is an anti-diet article; yes, I am against dieting.  I’m all about losing weight the right way; slowly, consistently, and consciously.  By making simple, yet mindful, changes to your diet and favorite recipes each day, you can, in the long run, achieve results far beyond your expectations, and in the process, reap extraordinary and rejuvenating health benefits.  To achieve this end, you have to stop dieting.  The magic bullet is you, and using your conscious mind to make wise, healthy, nutritious choices.

Yo-Yo Dieting is NOT a Long-Term Solution

Donald Trump has coined 2 catchy phrases: “make America great again” and “people are stupid.”  I identify with the first because my overarching mission is to make America healthy again.  But when it comes to losing weight, Americans are not stupid; they are just impatient.  We have become a culture of impatient dieters; dieters who want “instant” gratification and immediate results.  But instant gratification comes at a price because rapid weight loss is only transient.

Weight loss diets don’t work because they are restrictive, extreme, and conflicting – to what and how people want to eat.  Initially, it’s great.  Dieters are elated by their rapid weight loss and the discipline and pride it takes to reject food.  But over time, dieters become depressed, frustrated, and angry by the limits imposed by such radical diets that the diet becomes impossible to sustain.  Eventually dieters slip and return to old eating habits, often eating more than before the diet was started.  Dieters then develop emotional feelings of disappointment, weakness, and defeat resulting from the weight regained.  Determined to emerge victorious, dieters return to dieting, only to repeat the “Yo-Yo” cycle again.

Weight loss diets help manifest an unhealthy relationship with food.  Yo-Yo dieters become obsessed with food, thus creating a complex quagmire where food is neither friend nor foe.  But there are ways you can “win” the rat race.  You can simply leave the diet altogether and refuse to engage in diets altogether, diets that offer no acceptable long-term solution. Of two evils, choose neither.[1]

We all know someone who is an on-again, off-again dieter.  But there is one, very famous and wealthy celebrity who has gained national recognition for her adventures in Yo-Yo dieting.  Oprah Winfrey is the classic example of the futility of Yo-Yo dieting, lessons any dieter should take to heart.  And she’s on a diet again!  Her 2016 New Year’s resolution is to lose the weight once and for all by eating healthy, and this time she chose Weight Watcher’s to be her savior.  According to Oprah Winfrey, Weight Watchers “has finally given her the tools to begin to make the lasting shift that she and so many of us who are struggling with weight have longed for.”[2]  Oprah is no stranger to Weight Watchers, or to many of the other popular diets.  So what makes this time and diet any different?

Well, my friends, this time her diet is different because the more she loses, the more she has to gain.  She has lost weight (so far, 26 pounds), but gaining wealth in the process.  According to Forbes Magazine, “shares of Weight Watchers soared after billionaire media mogul Oprah Winfrey announced she took a 10% stake in the weight loss company.  Winfrey spent $43 million on the investment, according to a regulatory filing, buying 6.4 million newly issued shares at $6.79 a piece, and options to acquire an additional 5% stake.  Winfrey also joined the board of directors and will act as an adviser for the company.”[3]  Please help me understand why some people want to make the wealthy even wealthier?

Oprah, who now stars in TV commercials promoting Weight Watchers, has publicly declared she can “eat bread every day on her diet.”  And the “bread everyday” declaration is just the bait that will steer carb-loving Americans to the Weight Watcher Brand.

People Know What They Should Eat!

Everyday we are bombarded with news about nutrition and health, so what’s the problem?  With all the nutrition information out there, why would people pay good money for Fad diets?  It’s an American phenomenon I will never understand.  All the popular diets demand payment for services or supplies.  Whether it involves a monthly membership fee, purchasing a “diet” book, joining a blog, or participating in online classes and discussions, there is a cost involved.  Just recently, I had a colleague complain that she is paying $50 a month to belong to the Weight Watchers’ club.  She also has the additional expense for other prepared Weight Watcher products, such as prepared entrées and processed snacks and desserts.  Consumer Affairs has already reported 281 Weight Watcher complaints in 2016, and given it a one-star rating.[4]

But are people finally catching on?  “Shares of Weight Watchers plunged nearly 30% on February 26, 2016 after the diet company reported a surprise $11 million quarterly loss. The company’s sales fell and, most alarmingly, so did the number of Weight Watchers subscribers and attendance at meetings!”[5]

Just because I don’t believe in fad diets doesn’t mean I’m bashing Weight Watchers or any of the other popular diets.  You will lose weight if you religiously adhere to one of these diets, whether it is Weight Watchers, Slim Fast, or Nutrisystem.  Clinical studies confirm that weight loss will ensue when calories are drastically cut.  So if the goal is just weight loss, why not just cut meal portions in half instead of undertaking an unconventional diet?

You see, with ALL the popular diets, permanent, lifelong weight loss is seldom achieved.  Too many dieters are frequent flyers who are desperate for that magic bullet, a bullet only good for as long as the diet is sustained.  And that, my friend, is where they “get you” – and your money.   Trust me when I say that the majority of popular branded diet plans are “banking” on the fact that you will not keep the weight off because they want you – and your friends – to come back.  While you blame yourself for being weak and breaking the diet, you still brag to others about your weight loss on “X” diet, prompting others to join as well.  Misery loves company!

Europeans Know How to Eat

Europeans, those who actually live in Europe, mock America’s obsession with dieting.  Europeans seldom “diet”; they are mindful, healthy eaters.  They enjoy good cuisine, and they choose fresh, healthy, whole foods from their local markets or farms.  More importantly, obesity and chronic disease (diabetes, heart disease, arthritis, and cancer) are much lower in European countries than in the United States.  Europeans have sustained good health on just 2 meals a day; no snacks.  They hardly ever eat alone; for them, cooking is considered an art, not a chore, and dining is a social event.  Europeans spend hours with friends and family engaging in good conversation and laughter over good food and wine.  In Europe, food is a celebration of delicious cuisine and eating healthy is just a natural way of life.[6]  French Women don’t get fat.[7]

Learn How to Eat

In conclusion, if you want to give up dieting forever, make healthy choices, and lose weight slowly and once and for all, then contact Barbara Doherty Consulting for an appointment.  I promise, you will not regret it; it will be “the first day of the rest of your (healthy) life.

Recently, I found a great Tortellini Chowder recipe by Silverwolf on

.com. It looked so delicious and most of the ingredients were fresh, wholesome superfoods.  But some ingredients were incompatible with my diet choices.  So I decided to modify the recipe to meet my Vegan and nutritional needs by replacing some of the original ingredients with alternate foods that are more congruent with my personal proclivity.  For the complete recipe, follow the aforementioned link above.  Below, please find some of the substitutions I made to the recipe; you can also make your own desired, healthier, lower calories changes as well.

About the Author: Barbara Doherty